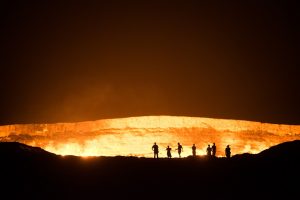 Italian scientists say that they have found the ‘Gate To Hell’.

Francesco D’Andria used ancient mythology as his guide to locate the legendary portal to the underworld.

Strabo (64 B.C.- 24 B.C.) wrote, “This space is full of a vapor so misty and dense that one can scarcely see the ground. Any animal that passes inside meets instant death. I threw in sparrows and they immediately breathed their last and fell.”

Sounds like an ideal destination for a package holiday. Of course, you’d come back in a different kind of package to that which you left in.

When I was about nine years old and living in France I saw Histoires Extraordinaires (Spirits Of The Dead) on a small black and white TV late one night when I couldn’t get to sleep. Suffice to say it scared the hell out of me, mainly because of the unsettling and truly bizarre Fellini portion of the film, ‘Toby Dammit’. Based loosely on several Edgar Allen Poe stories, seeing this collection of short films coincided with my asking my mother for Poe’s complete anthology, that I got for my tenth birthday and I still have to this day.

The Fellini segment is based on the Poe story ‘Never Bet The Devil Your Head’. You could argue that it’s not that close to the original piece, but the uneasy and confused state of mind that Fellini creates with art direction and camerawork captures something about Poe’s writing that I find fascinating; a sense of evil and a distrust of social norms. In some ways, Toby is better off at the end.

A very nice person has made this available on YouTube in five parts.

Born in 1560, and considered the most infamous serial killer in Hungarian / Slovak history, Countess Elizabeth Bathory abused her position of power to abuse others. After some rumors that were circulating became so numerous that they could be ignored no longer, King Mathias II sent a party of men to Castle Csejthe where Elizabeth had been quietly going about her business.

They found a dead girl, another one on her way, another wounded and many others locked up. They’d been beaten, attacked with needles, burnt, bitten and starved. Over twenty five years it became apparent that she’d claimed hundreds of victims.

They couldn’t do much due to her status, so they locked her in one room for the rest of her days.

The Top Ten Most Evil Women

Unfortunately it’s also a great place to get murdered. And while the gun debate rages on, there are nutters out there quite willing to lay down their firearm and get a whole lot more creative on your sorry ass. Meat cleavers, razorblades, furnaces, or how about a pair of garden shears?

If you’re a pianist and you think you’re not quite getting through to your listeners when you play your latest party piece, this could be the way forward. A piano that actually speaks.

The keys are struck by solenoids, and the resulting sound mimics human speech. It’s completely weird, and of course what’s stranger still is that it’s reciting the Proclamation of the European Environmental Criminal Court at World Venice Forum 2009.

However, if you’ve ever wondered how your piano might sound if it was actually trying to transmit a message from the bowels of hell straight from the devil himself then it could well sound spookily similar to this.

If you’re an author and you’ve been looking for inspiration on where to set your next horror novel look no further. These incredible pictures of some of the most creepy and abandoned places in the world are simply stunning.

My particular favourite is of course The Ruins Of Detroit because they contain pictures of pianos and all kinds of gothic style decay.

Take a look for yourself at some of these pictures and imagine yourself being chased around in these places by all manner of nasties. Cool.

Anne Green was a 22 year old woman from England who was most likely seduced by the grandson of her employer. When Green became pregnant she hid her pregnancy and gave birth to a premature baby boy who died soon after he was born.

After trying unsuccessfully to hide the child’s body Green was accused of the murder and was sentenced to death by hanging. During the execution Anne Green had to climb the ladder up to the gallows where the rope was laid around her neck and then was pushed off the ladder.

After about half an hour her body was cut down and placed in a coffin and taken to a local doctor who gave anatomy lectures at the university. When the doctors and others assembled for the dissection and opened the coffin they noticed that the corpse “took a breathe and they heard sounds coming from her throat.”

After giving her hot drinks she opened her eyes. The treatment continued with bloodletting and twelve hours after the execution Anne Green was able to say a few words. After her unique rescue the court usher attending the execution and the prison director of Oxford agreed that Anne Green should be reprieved.

Green later married, had three children and lived for fifteen years after her famous execution.

EXTRA LINK FOR THE NON-SQUEAMISH –

15 most brutal methods of execution of all time

Lo and behold, it’s the Wildcat Head Ossuary! It’s a wildcat’s head, in a glass box. Unfortunately the display box costs extra, and also it looks like they’ve all been bought anyway. Damn!

The artist, Sarina Brewer, is part of The Minnesota Association Of Rogue Taxidermists (MART) and their stuff is well worth checking out. If you’re into that kind of thing. But then, who isn’t?