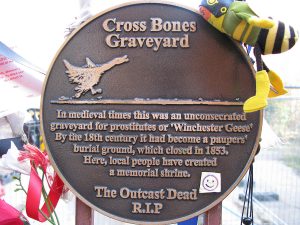 Cross Bones Graveyard near Borough High Street in London is a pauper’s burial ground with a legend going back to medieval times. Prostitutes were buried here in the 16th Century as they were forbidden to be buried with the usual rites. They were often stacked on top of each other, and beggars and thieves used to pick through the graves, gathering what little they could of any value from the deceased.

It was also called a ‘Single Women’s Churchyard’ and between the 12th and 17th Century, the whole surrounding area was controlled by the Bishop Of Winchester, and as it was beyond the reach of normal governance all kinds of things were allowed that were forbidden in other parts of the city.

You can read more about this fascinating burial site and the legends surrounding it at the Cross Bones Graveyard site.