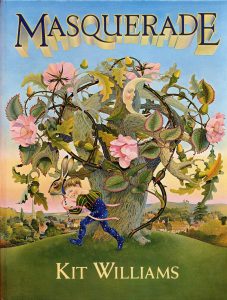 The late seventies gave birth to a very different kind of publishing phenomenon; the armchair treasure hunt. Long before Geocaching was a thing, the book ‘Masquerade’ featured puzzles hidden in beautiful and elaborate illustrations by artist Kit Williams and sparked a national craze as armchair puzzle solvers up and down the country (and later the world) attempted to unravel its mysteries and thus discover the prize; an 18 carat gold hare buried somewhere in the British Isles.

But the contest morphed into its own conundrum as a spectacularly bizarre turn of events mired the competition in controversy and, despite the author’s best efforts, the prize was never officially won.

Three years after the book’s release Kit received a solution by post from Ken Thomas describing the exact location of the golden hare. However, details of its unearthing became slightly sketchy as Mike Barker and John Rousseau, two school teachers who’d dug in the correct place previously, had unwittingly re-intered the hare during their excavation leaving Ken Thomas a fresh dig site with only a few piles of earth to sift through to claim the prize. Even though they had technically solved the puzzle first, by the time Mike and John’s correct solution had popped through Kit William’s letterbox the story was already out and Ken Thomas had been declared the winner. END_OF_DOCUMENT_TOKEN_TO_BE_REPLACED